THE CORE SKILL YOU NEED FOR HIGH EQ 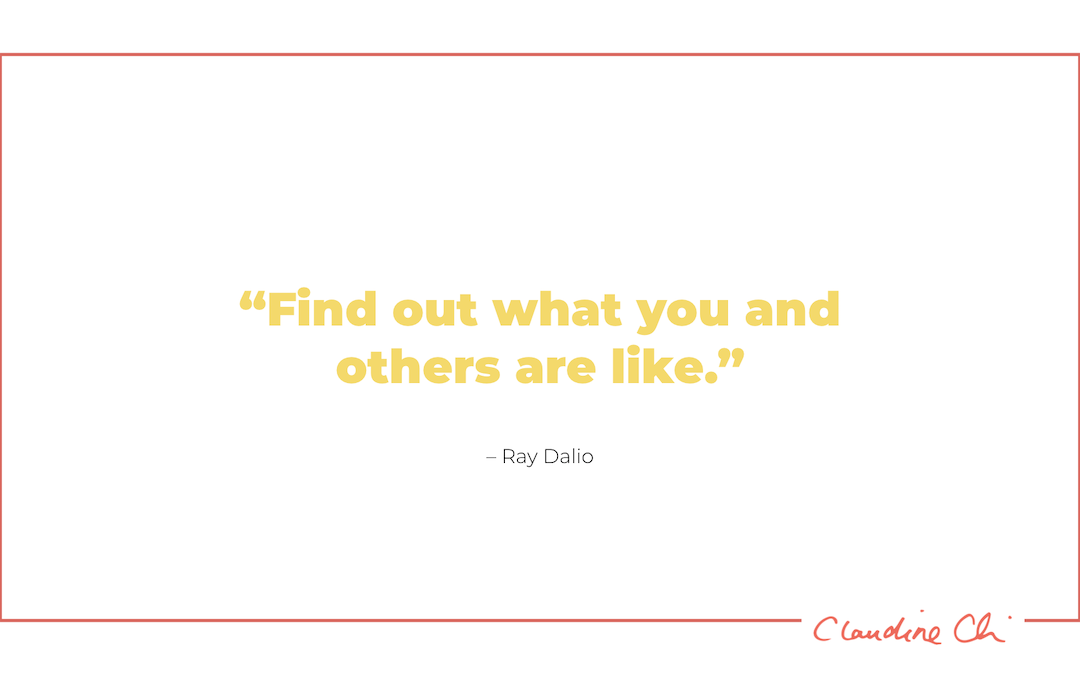 In my last post we talked about how emotional intelligence is made up of a bunch of different parts, which are actually skills.

And I believe that one of those skills is essential to ALL of the other skills.

I’m talking about Self Awareness.

Because when we have low self awareness we’re usually totally mistaken about;

Do you know someone who has low self awareness? Can you see any damage that person is unknowingly causing, maybe in their own life, or to others?

LET’S GET A BIT NERDY- A FRAMEWORK OF EMOTIONAL INTELLIGENCE

To fully explore how self awareness feeds into all aspects of our EQ, let’s take a look at a model of emotional intelligence based on Daniel Goleman’s work, because he’s pretty much the world’s most leading authority on all things EQ. 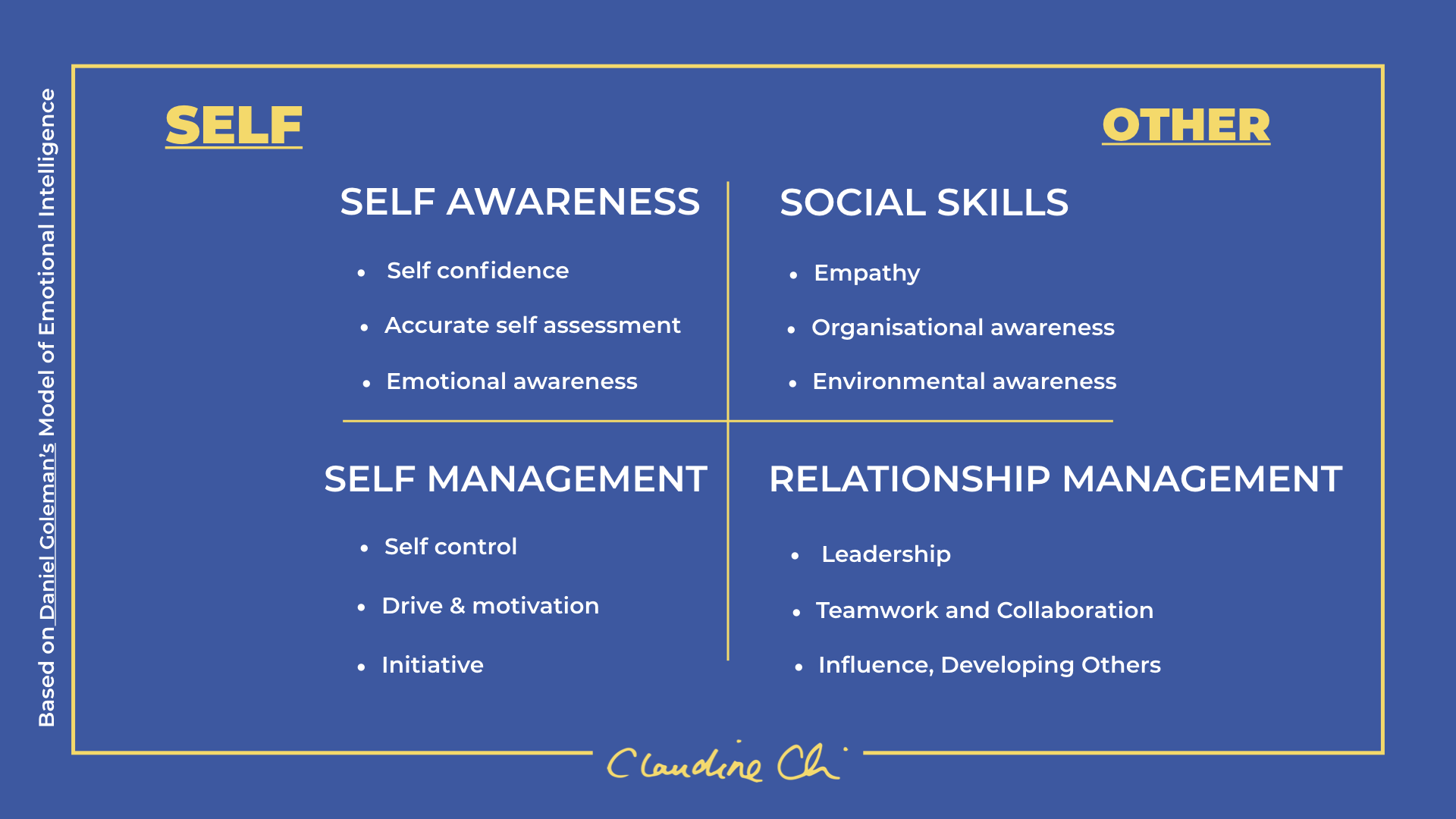 For effectiveness (and design) I’ve consolidated some of Daniel’s original bullet points, and used slightly different wording to summarise.

For now, the point is to just get a sound overview of this model. [If you’re curious you can take a look at Daniel Goleman’s exact EI framework on page 2 of his chapter, here.]

Ok, so you can see how the model is divided into halves- SELF and OTHER, and it’s also divided into quarters.

Under Daniel Goleman’s EQ framework the 4 key quadrants of emotional intelligence are;

Using this pic below, here’s how I believe this model works in real life; 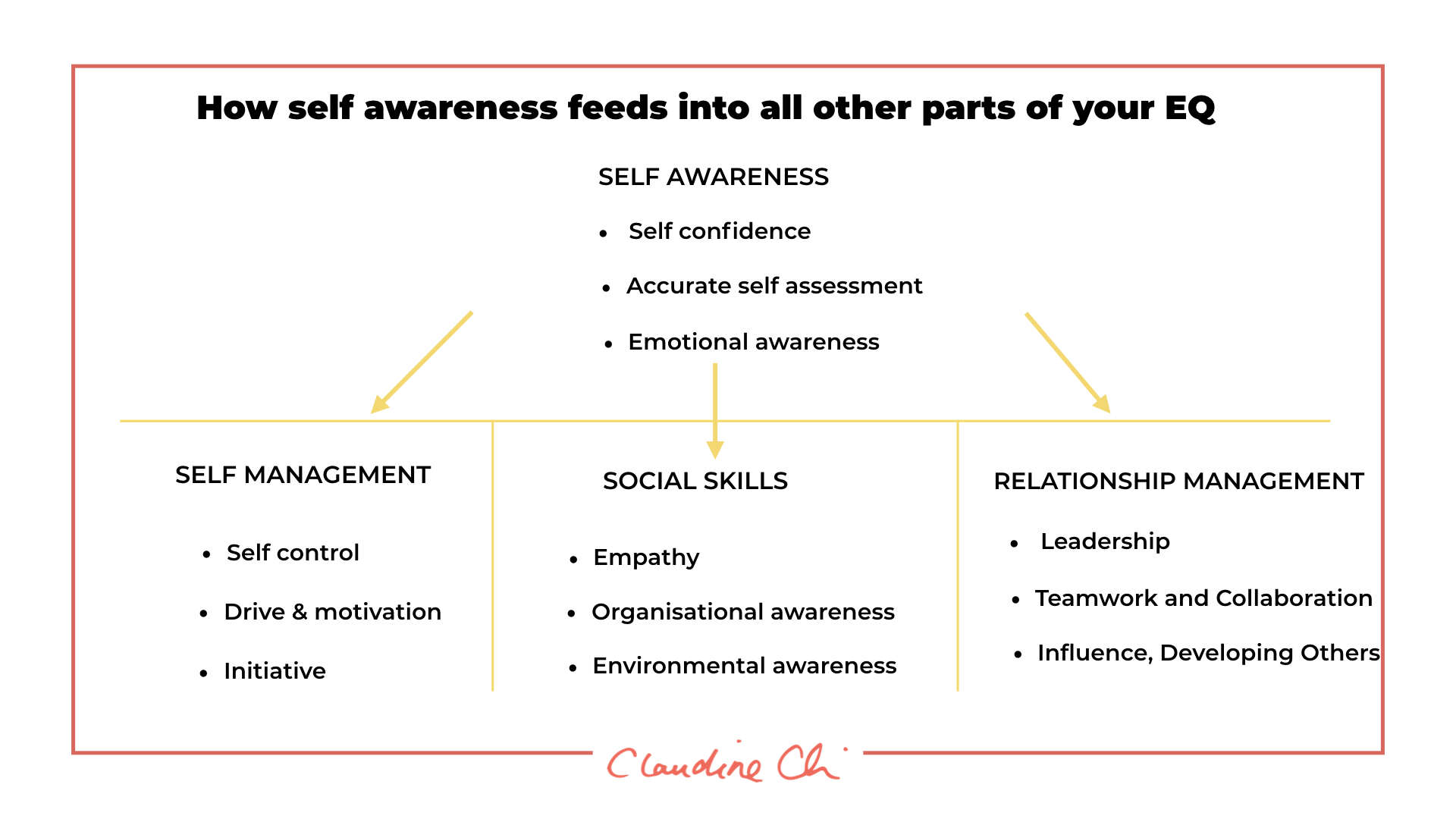 – How can we have a high degree of self control (SELF MANAGEMENT) if we cannot effectively recognise or identify our own feelings?

– How can we have effective influential skills, or be great at building teams (RELATIONSHIP MANAGEMENT) if we never stop to consider the tone and manner we use when talking with others? Maybe our style is super effective for some, but not for others. How can we realise this, if we’re are unaware of our own style in the first place?

OK, BUT WHAT DOES LOW SELF AWARENESS LOOK LIKE IN ACTION?

There’s a million ways that low self awareness can be demonstrated but here’s a few hypothetical examples to help us paint a picture.

Can you recognise anyone you know as you read through these  examples?

You’re certain you’re doing an awesome job at work. You can’t understand why your boss is always questioning everything you do. You convinced they’re just a total control freak.

This person is very likely to be an under performer. Yes, they could have a controlling boss, but I doubt it. If they were very self-aware, they’d be able to accurately identify that the problem isn’t them, it’s their boss.

This person overestimates their efforts and results which is a consequence of their inaccurate self assessment. There is also a self-confidence issue- namely, they have an inflated sense of self. On the surface this appears as having high self-confidence, but it’s usually insecurity completely disguised.

[Additional insight– I’ve debriefed a lot of 360 degree feedback reports for managers / leaders, and the pattern is overwhelmingly obvious; people that are underperforming are certain that they’re doing great- which isn’t the case. They usually blame everyone else and never look at themselves. They don’t self reflect, which is critical to self awareness.]

Now, here’s the exact opposite example.

You’re trying really hard at work but it feels like you’re never doing well enough. Your colleagues and even your manager often tell you you’re doing a great job, but you’re certain they’re just trying to be nice.

This person is probably a perfectionist or an overachiever, which means they consistently underestimate their performance and results. Why? Because their benchmark is total excellence, or perfection. They’re kicking goals and doing great, but they don’t acknowledge or see it.

They live at the opposite end of the spectrum to Person 1, however the driving force is exactly the same– their ability to assess themselves, their skills, and their performance is inaccurate. There is also usually a low self-confidence issue here too, presented as the brutal “I’m not good enough” syndrome.

You’re close to the edge because you’re taking on everything, everywhere. You’re driving (and probably over-managing) big projects at work, and you do the lion’s share of things at home. Then there’s the friend you’re helping get through their break-up/ illness etc. PLUS there’s the extra-curricular events/ functions/ projects you organise or run in your “spare time”.

You do everything for everyone else and put yourself at the bottom of your to-do list. You’re too exhausted to realise that you’re snapping at your partner quite a lot, and deep down, you resent some of your colleagues who don’t seem to be working as hard as you.

This person is probably a perfectionist, a people-pleaser, or an overachiever.

These people have great intentions and are typically SUPER capable, but they have no idea how much damage they’re causing as they drive themselves into the ground to get everything done. Their low awareness means they’re oblivious to their own feelings and moods, which is harming not only themselves (they’re burning out), but also the quality of their relationships.

You hate the idea of being controlling, or worse– being patronising. But when a colleague / friend asks for your advice, the solution is just so obvious! After a few minutes of listening to them, you’ve already got it. You know exactly what they need to do and you tell them “If I were in your shoes, I would just….”.

Your colleague/ friend tries to explain it to you again, but you’ve switched off. You repeat yourself about what they should do, because they clearly didn’t get you the first time you said it.

This person usually has very good intentions but their low self awareness about how they deliver their advice contradicts their intentions to be helpful.

They’re unaware of the tone of voice they’re using, and they’ve completely missed the fact that they’ve jumped straight to solution mode without fully understanding what the problem actually is. They’re unaware that it could be more helpful to talk less and listen more deeply, in order to discover what is really going on.

So what did you think of these examples- did anyone spring to mind? Or did any of the examples ring true for you?

What do you think about self awareness being the core of all EQ? Do you agree, or do you see it differently to me? I’d love to know!

Please share your comments, insights, or questions below- I’d love to know your thoughts on this!

As always, you can let me know via email as well.