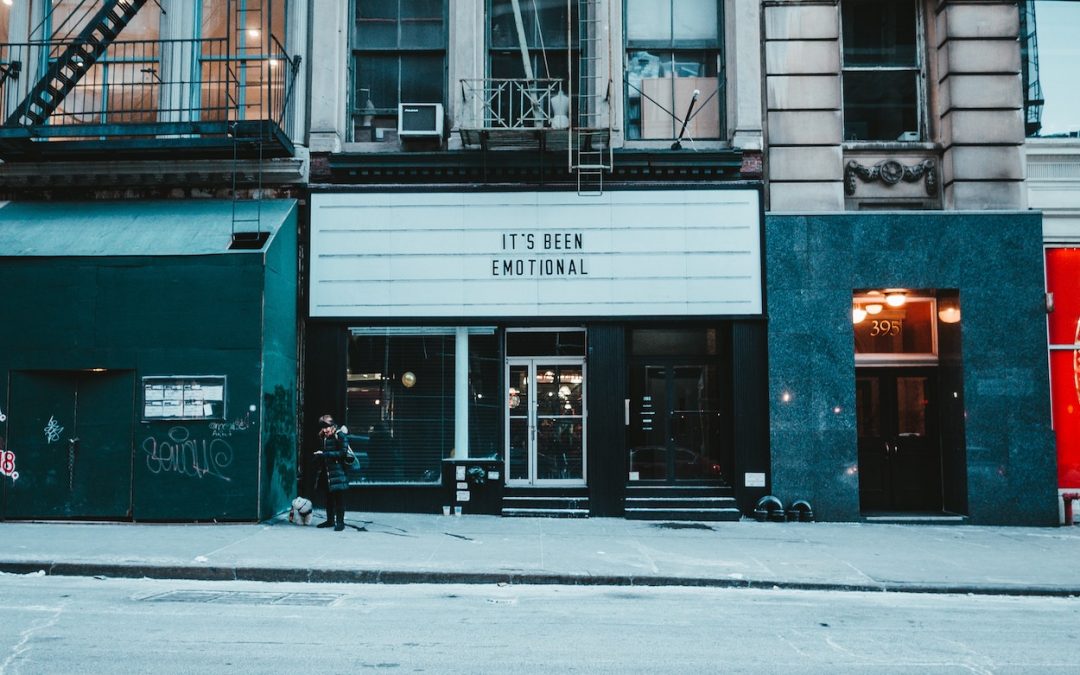 Last week we talked about the most underrated skill today, which is resourcefulness.

It’s what successful people have in abundance, and people who struggle in life don’t.

Today, I want to dig deeper and unpack your ultimate resource– your emotional state. (I love this short and direct clip of Tony Robbins, getting to the core of it.)

Our emotional state is what drives people to get married, or get a divorce. It’s so powerful it can even drive people to do the utterly impossible– like lift a car off a trapped child. Yes, that is really a thing. 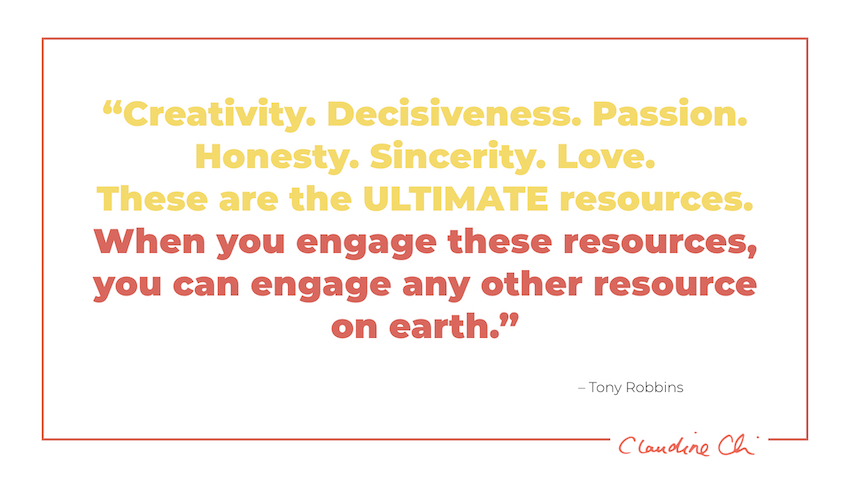 THAT TIME YOU WERE IN “THE ZONE”

Have you ever done something and later looked back at it and thought WOW. How did I do that? That was actually pretty amazing!

Maybe you were having a fantastic day and you felt totally on top of your game.

That time you said exactly the right thing.

That time you took that winning shot and made it.

The sale/ the meeting/ the game/ the relationship- you just NAILED it.

COMPARE THIS TO “THE DANGER ZONE”

What about when this has worked the exact opposite way?

Can you look back on something you’ve said or done, and thought OMG how did I say that? How could I do that?!

You know you’re not a bad person, but you were so fired up, so angry, so upset, so frustrated– or just so over it!– that you really lost your cool.

You said something or did something that you quickly looked back on with regret, or with embarrassment. It’s just not you!

What fuelled you to act out in frustration is exactly the same thing that drove you to run that meeting like a total boss.

It was your emotional state.

WHY WE PRETEND TO BE RATIONAL (BUT EMOTIONS REALLY DRIVE BEHAVIOUR)

I don’t care how logical and rational you are, if you’re a person, you’re primarily driven by emotions.

If people were as logical as they claimed to be, almost everyone would;

But that’s not what most people do, because facts don’t change our minds.

Instead, we justify our decisions as logical or rational, but really our actions (or lack of action) is because of HOW WE FEEL.

Climate change makes some people angry so they deny it. These ill equipped fact-deniers don’t want to have to be accountable for their behaviour, or change it, so they deny the facts.

Others might deny leaving a bad marriage, or deny having to “speak up” to their patronising boss, even though their marriage is a disaster, or their boss is damaging to their confidence and wellbeing.

Respect, let alone love, could have left the building a long time ago, yet they justify staying there as “the right thing to do” (based on “logic”) for one reason or another.

I’ve written before about how managing your emotions is the most important part of emotional intelligence, because your self-management  determines everything from your stress levels, to how you feel about yourself and everything that happens to you!

But most of us have NO IDEA how to create a specific emotional state.

We just roll out of bed, and that’s how we show up for the day!

Rather than consciously knowing how to cultivate a certain mood, most people just respond to life BASED ON HOW WE FEEL.

Do any of these sound familiar?

— Feeling tired so I won’t go to the gym today.

— Feeling anti-social so I won’t go out tonight.

— Feeling blah so I’ll just drag myself through work today.

— Feeling angry so I’ll just shout at my partner, or at my kids.

WHAT?! REALLY? Is this how life should be?

I want so much more for myself, and for YOU.

I want us to be able to effectively manage– not be at the mercy of– our emotions. 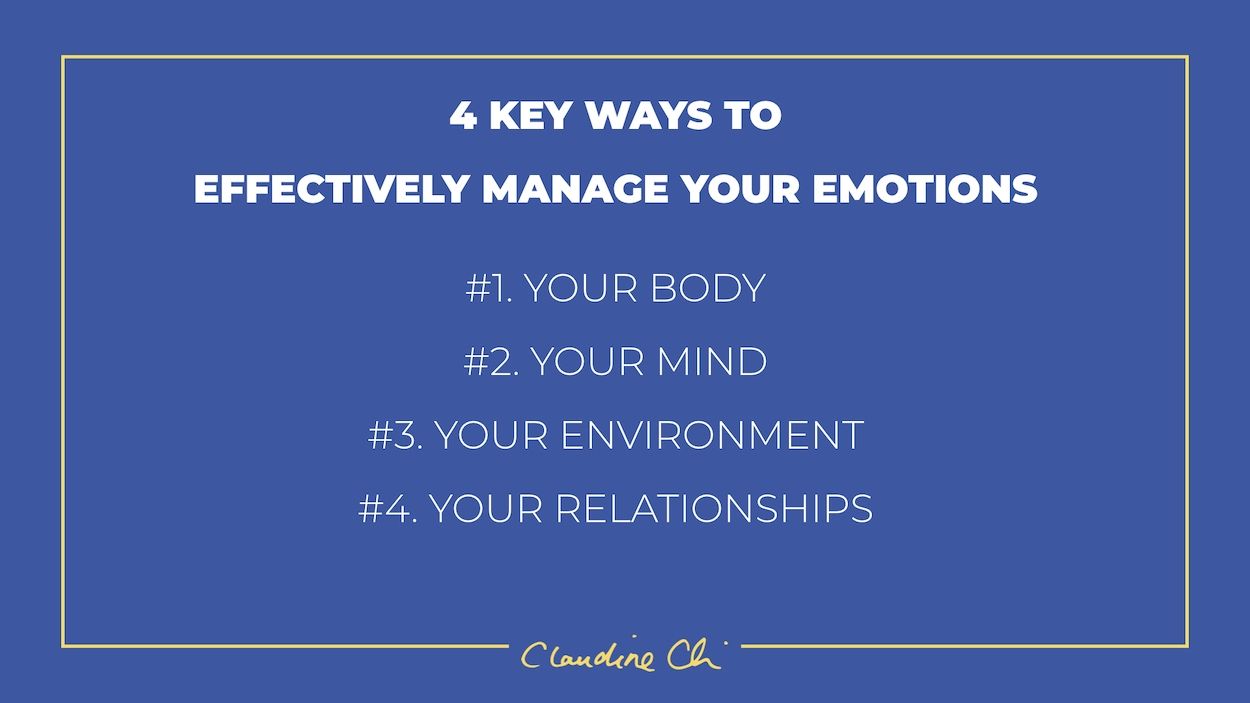 Moving your body is the fastest and most powerful way of changing your mood.

To illustrate, think about what happens when you blast your favourite song and you dance around the house like a total (happy!) weirdo, or you sing along in your car? Oh YES!! Instant state change!!

Other instant state changes through moving your body include:

Even the simple act of taking one slow, deep breath before you respond to someone can make all the difference between blurting out something rude and fuelling an argument, or speaking respectfully and building a connection.

Academics call this a cognitive re-frame. I like to just call it– seeing things another way.

We learned exactly how to do this a few weeks back, when I explained my Mind-Tune Method about Circular Questions and Target Questions. People that are always stuck ask “circular questions” e.g. why me? why are people so bad? etc.

But people that are resilient and solution-focused ask “target questions”— questions that focus on a better, more compelling future e.g. what would this look like if it were simple? how can I overcome my situation?

When we ask target questions, we create a new emotional state.

They serve us to shift from fixed thinking and being stuck, to making progress towards somewhere better. And that feels AWESOME.

We begin to see things in a more productive, positive, and effective light.

Change your perspective to change how you feel.

Architect Michael Arad, who won the design competition for the World Trade Center Memorial, is masterfully attuned to knowing how our environment impacts how our mood.

“As an architect, it’s a responsibility. What is the space that we create? How does it affect others who walk through it? The most obvious example of it in New York is between Grand Central and Penn Station. Those are two large spaces. They channel hundreds of people a day. And one does it in a way that elevates the spirit, and one just humiliates the people that walk through it on a daily basis.”

At work, a cluttered desk and piles of papers stacked around you evokes a totally different mood to being in a clear, well-organised space.

A house full of “stuff” feels completely different to a minimalist ”zen” home, or a place that’s been consciously designed or is full of art and colour.

Sometimes it’s simply a matter of having an extra plant in the office, or a single candle burning away in the background.

Be it an area, a room, or a suburb — change your environment to change how you feel.

When we’re struggling in life, many of us tend to manage what’s going on and how we feel about it, by shutting down and isolating ourselves.

We make up a bunch of reasons (that “logic” again!) why we should soldier on alone;

I don’t want to be a burden.

I don’t want to be a negative person.

I should be a man about this– I should just get on with it.

I don’t want to look like I haven’t got my act together.

We find it SO hard to effectively express ourselves and say what’s really going on inside of us. It seems too scary, too hard, or too confronting.

This “go it alone” attitude is totally counter-intuitive and is ineffective as a means of dealing with our emotions, and life.

As soon as we leverage our friendships, our peers, and our connections with others (the right people of course) we can share the load that we carry.

We can get support, hear new perspectives, and gain a stronger ability to face the situation so that we can deal with it more effectively.

By leveraging your connections and by fostering deep, strong relationships, you can change how you feel.

There you have it! 4 KEY WAYS to effectively manage  your emotions.

The next time you’re in a certain mood that you don’t like, or which is stopping you from being the person you really want to be, you have 4 key areas that you can consciously take action in.

I know you’re already doing a bunch of these already– which of them are your fav’s?

Do you go to the gym to feel more energised?

Do you go for a walk with a friend and talk through issues?

Some of my favourites ways to manage my emotions include:

Meditation: helps me to feel calmer, sleep better, feel connected (to myself and to the universe), and it stops my mind from racing in it’s charming, excitable fashion!

Surfing: helps me to be present, feel connected to nature, and totally refreshed.

Talking with a friend: helps me to feel connected and supported, and I get far better clarity or new ideas on a situation than if it was just me.

Please consider sharing your favourite strategies for managing your mood in the comments below.

You never who it might help, and I’d love to know works for you!